HySpex Mjolnir VS-620 is developed for UAV operations. However, the system can be also be mounted on a tripod with a rotation stage and deployed in the field for proximal scanning. This article describes how this system also can be used to generate a surface model of the scene imaged. 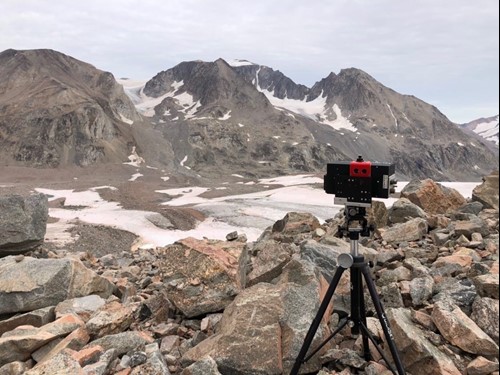 HySpex Mjolnir VS-620 in field configuration

Mjolnir VS-620 contains two coaligned pushbroom hyperspectral cameras. One Mjolnir V-1240 camera covering 400-1000nm and one Mjolnir S-620 camera covering 960-2500nm. The two camera heads are mounted in a single chassis, next to each other with a 75mm distance between the optical axes. The optical axes of the two cameras are coaligned, meaning that they are completely parallel. This means the FOVs of the two cameras match perfectly at infinity, while the shift in spatial pixels, between the two FOVs, becomes greater the closer the scene is. This shift can be used to calculate the Digital Surface Model (DSM) of the imaged scene. Thus, Mjolnir VS-620 enables a completely new approach to hyperspectral proximal sensing and data processing, by also meeting a number of other conditions to generate an accurate disparity map:

In a field setup, the Mjolnir VS-620 is usually mounted on a rotating stage on a tripod. The rotation of the camera builds the hyperspectral image, line by line, by scanning the scene.

The images below shows a sample image from the two sensors: 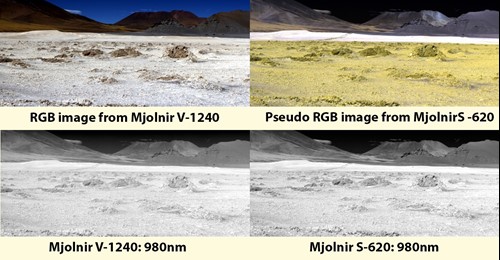 Using classical stereo imaging algorithms, the two images are used for computing a disparity map. The disparity map for the entire scene is presented below.

The disparity map together with the sensor models is used to calculate the DSM of the scene from the perspective of the camera. All Mjolnir VS-620 cameras are supplied with a high accuracy sensor model, or geometric characterization, required for direct georeferencing of airborne/UAV data.

Having this information, it is possible to co-register the V-1240 and S-620 data cube into a single VS-620 data cube without any external data or additional hardware e.g. terrestrial LiDAR.

The plot below shows a single Reflectance spectral profile from a combined cube (400-2500nm).

HySpex Mjolnir VS-620 is a scientific grade hyperspectral imager developed for UAV operations. Utilizing the fact that the two systems are coaligned with a high degree of accuracy and designed with sharp optics yielding similar PSF for VNIR and SWIR, the overlapping spectral regions can be used to generate a digital surface model and thus coregister the two sensors extremely well also for field operations without using a terrestrial LIDAR.