Classifying and detection of leftover explosives in military shooting ranges

Left over explosives in military shooting ranges are considered to pose both an environmental hazard and a health risk due to its toxicity. The explosives particles are typically of varying sizes and spread heterogeneously over large areas. To do risk assessment and clean up, it is necessary to map the distribution of explosives and detect areas of high pollution. This can be a time consuming and an expensive job where a large number of samples need to be collected and analyzed.

This task can be greatly reduced by scanning the shooting range using a hyperspectral camera capable of imaging large areas with high spatial and spectral accuracy. In this application note we show how different types of explosives can be detected and separated from a background of soil or grass using hyperspectral imaging. The results presented are from a research report by the Norwegian Defence Research Establishment [1] with permission from the authors. 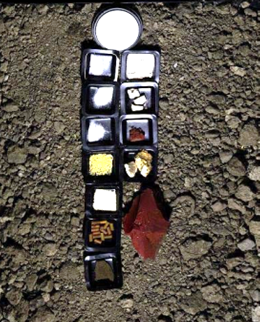 Different types of explosives were tested, both pure explosives in powder form and mixes containing several ingredients. The samples were put in black plastic cups and onto a tray filled with grass or soil as background. The different samples used are listed in the table below in the same order as the sample setup shown in the image.
The samples were imaged in the laboratory. The whole tray containing soil, grass, and samples were scanned using a translation stage, broadband halogen lamps, and a HySpex Classic SWIR 320m-e hyperspectral camera [2]. The camera operates in the 970-2500 nm range with 256 spectral bands and a resolution of 6.3 nm. In this configuration, it uses a closeup lens covering a FOV = 30 cm with a spatial resolution of 0.92 mm.

Since the type of contaminants studied here can impose a health risk even in small quantities, it is essential to be able to identify small objects in the scene. The low keystone effect characteristic of the HySpex sensors allow to reliably classify a single-pixel object detection while the low smile distortion [3] provides the accuracy to identify narrow spectral features consistently along the field of view. 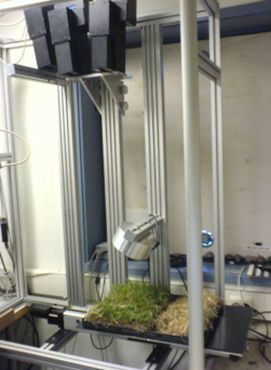 The result shows that most of the samples have a characteristic spectral signature in the SWIR region that can be used to distinguish them from the background. The only exception is one of the unknown samples found in the field that shows very limited spectral structure. From the reflectance plot we also see that it could be feasible to use hyperspectral imaging to characterize the type of explosive as each type has a distinctive spectral signature. Interestingly, the minimum around 1650 nm appears to be common and characteristic for explosives, but other spectral features are also contributing to the detection and classification.

The data was processed using anomaly detection. This statistical analysis method looks for spectral features that are deviating from the main spectral characteristics defined by the background. The result is a greyscale image showing the probability for an image pixel of being part of the background. A light color indicates a low probability.

Anomaly detection and segmentation. The anomaly plot (left) shows how well the different types of explosives can be separated from the background – soil, in this case. In the image to the right, a threshold value is selected to segment the image. All pixels below the threshold are colored black and all pixels above the threshold are colored white. All the samples representing different types of explosives can be clearly separated from the background, the only exception in this example being the Unknown sample 1.

By applying anomaly detection, foreign objects other than explosives will also be detected. If the goal is to clean up an area, this can be an added benefit as other types of debris and contaminants will be efficiently identified. Other data processing techniques can be applied to the data if the goal is to distinguish explosives from other objects or to distinguish them from each other. The detection and classification can also be implemented in real-time.

This example shows that hyperspectral imaging can be used to detect a variety of explosives on a surface of soil or grass. The method can be used to efficiently map the contamination of explosives in military shooting ranges by placing the camera on a drone or a vehicle to scan the area of interest. The example also shows that this type of application benefits from the high resolution and image quality characteristic of HySpex cameras. 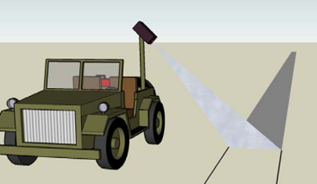 Multiplatform deployment. The HySpex cameras can interchangeably be used in laboratory, field, airborne and UAV-based platforms. The analysis can be implemented in real-time or during post-processing.

Contact us to discuss your application and requirements with our specialists.