For each pixel in an image, a hyperspectral camera acquires the light intensity (radiance) for a large number (typically a few tens to several hundred) of contiguous spectral bands. Every pixel in the image thus contains a continuous spectrum (in radiance or reflectance) and can be used to characterize the objects in the scene with great precision and detail.

The camera images the scene line by line using the so-called "pushbroom" scanning mode. One narrow spatial line in the scene is imaged at a time, and this line is split into its spectral components before reaching the sensor array. On the 2d sensor array, one dimension is used for spectral separation and the second dimension is used for imaging in one spatial direction. The second spatial dimension in the scene arises from scanning the camera over the scene (aircraft movement). The result can be seen as one 2d image for each spectral channel, or alternatively every pixel in the image contains one full spectrum.

Illustration of how one spatial line of a hyperspectral data cube is captured.

Briefly, the camera operates as follows: The camera fore optic images the scene onto a slit which only passes light from a narrow line in the scene. After collimation, a dispersive element (in our case a transmission grating) separates the different wavelengths, and the light is then focused onto a detector array. The net effect of the optics is that for each pixel interval along the line defined by the slit, a corresponding spectrum is projected on a column of detectors on the array. The data readout from the array thus contains a slice of a hyperspectral image, with spectral information in one direction and spatial (image) information in the other. By scanning over the scene, the HySpex camera collects slices from adjacent lines, forming a hyperspectral image or "cube", with two spatial dimensions and one spectral dimension. Note that the scanning is often intrinsic to the application: In remote sensing, scanning is provided by aircraft or satellite movement. Also, in many industrial quality control applications, products conveniently pass the sensor on their conveyor belt. 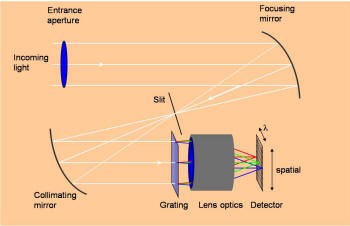 The HySpex hyperspectral camera is capable of acquiring data well beyond the spectral range of the human eye, which is limited by a maximum wavelength of about 700nm. HySpex cameras can be configured for imaging out to 2500nm, thus including a large portion of the infrared spectrum. For many applications, the reflection/absorption properties in the IR region are essential to characterize, quantify or classify the objects in the scene.

Following the recent advances in sensor development and computing power, hyperspectral imaging is now ready to take the step from slow and unreliable research prototypes to reliable and accurate analytical instruments for applications ranging from online industrial monitoring/sorting/classification to laboratory measurements, clinical instruments for medical diagnostic and airborne and satellite-based remote sensing tools. NEO's HySpex hyperspectral cameras are well suited for all these application areas and many others.